A talk by Jacqueline Cheung and Eric Gleason, 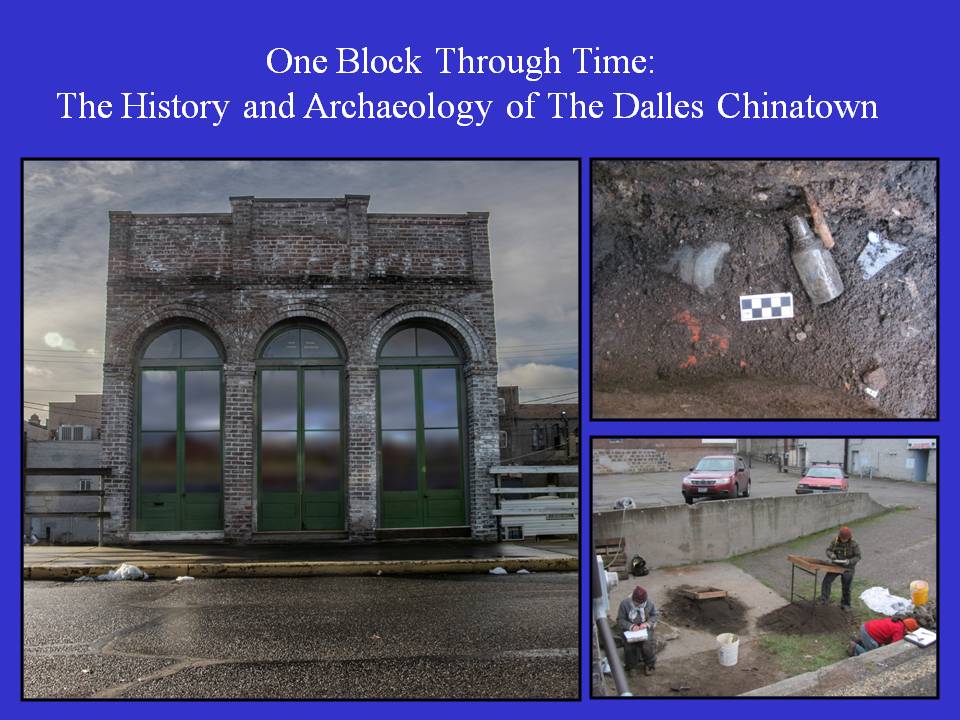 From the 1860s until the early years of the 20th Century, The Dalles, Oregon was home to a thriving Chinese diaspora community. By the 1880s this community had become concentrated along a single block in the downtown, fronting on what was then Main Street. Recent archaeological excavations associated with the last standing Chinese business building, the Wing Hong Hai Company store operated by Lee Yuen Hong, exposed features and recovered artifacts associated with this community. The archaeological finds and archival research are helping to bring the history and contributions of this community back to life.

Eric Gleason spent his formative years in Oregon, growing up in Boring and attending Sam Barlow High School in Gresham. He furthered his education at Washington State University, receiving a degree in Anthropology in 1982. He has been pursuing the life of a field archaeologist ever since, beginning with work at North Bonneville, Washington in 1978, and most recently on the upper Columbia River on Lake Roosevelt working for the Colville Confederated Tribes.

Jacqueline Cheung grew up in California. After receiving her degree in Anthropology from UC Berkeley, she started fieldwork in Southern California before beginning her long career in the Pacific Northwest.

In 1989, Eric and Jacqui moved to The Dalles, where they bought an old fixer-upper house. As if one large unfinished project was not enough, they bought a long vacant building in downtown The Dalles two decades ago, and have been slowly trying to fix that up as well. During the course of this restoration, their passions for archaeology and historic preservation merged with the discovery of the Chinatown archaeological site. This ongoing project is helping to uncover the history and significance of Chinatown in The Dalles, and place it in a Regional and National perspective.

Finding Common Ground Between Archaeologists and Collectors: A Case Study from Northwest Oregon
Archaeological Oddities: A Field Guide to the Most Improbable Sites in North America
X
X
X